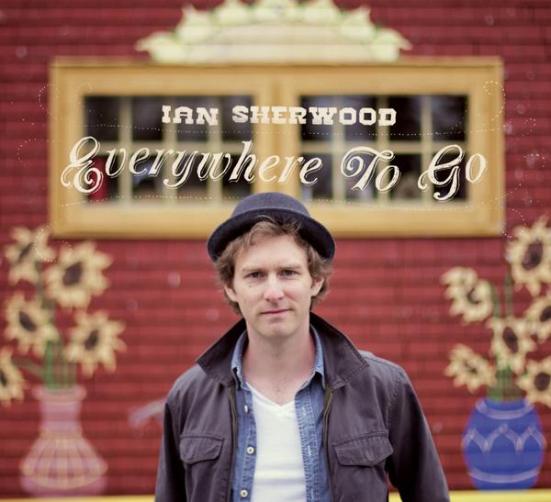 Multi-talented Halifax musician Ian Sherwood has already released some great songs.  “What Am I Doing Here”, “Capetown”, “Here I Go”, “Shoop Shoop” and “We’re Not Alone” stand out as some of his best.  For his work, Sherwood has been named Contemporary Singer of the Year by the 2013 Canadian Folk Music Awards, Best Male Artist of the Year by the 2012 International Acoustic Music Awards and was the 2008 and 2010 Music Nova Scotia Musician Of The Year.

Sherwood’s fifth album, Everywhere We Go,  is his best  yet.  From the opening title track to my favourite “Stop, Don’t Fall In Love” to the Billy Joel-esque “Me Or Your Money”, to the final song “No Water”, Sherwood’s song-writing and smooth voice take to the fore-front.  In the word’s of  Newfoundland comedian Shaun Majumder “You know that Silk Soy Milk? The chocolate kind? That’s what his voice sounds like.”

Shewood celebrates the release of Everywhere You Go with a Maritime Canada tour starting at The Company House in Halifax on Saturday, September 13th.  The show starts at 8:30 and tickets are just $15 in advance or $20 at the door.  Here is the link to the Facebook event page.

I have had the opportunity to see Sherwood live a number of times and each time I walk away amazed at his talents.  If you have an opportunity to get out to his CD release tour, I highly recommend it.